The tool was devised as a much cheaper and easier to manufacture multi purpose tool to replace the original Mk1 tool issued with early BREN guns. It would seem that these were first issued around 1941 and continued to be issued right up until the demise of the L4 series 7.62mm LMG versions in the early 1990's. The tool consists of a 5 inch (155mm) length of steel tubing, flattened at one end with a 5/8 inch (16mm) wide flat screwdriver tip riveted into and protruding from the flattened end. The other end of the tube has 2 notches cut into it to act as a wrench for use on the return spring nut on Mk1 guns.

These were in production throughout the latter part of WW2, and continued to be produced until probably the early 1980's, although it is common to find these undated and with no markings at all which makes it difficult to be exact. The tools were produced in a wide variety of finishes from galvanised, through chemical blacking and often with a baked paint finish. See pictures for the range of finishes. The majority of the tools offered here are unmarked, except perhaps for a Broad Arrow acceptance mark, although some do carry manufacturers marks or factory codes, and there are some 1950's dated ones. Condition ranges from virtually unissued through to good used condition with the usual wear to the finish and minor knocks and dings from daily use. These were usually carried in the BREN gunners wallet. 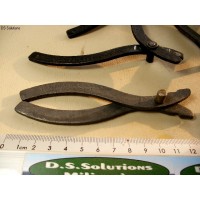 These are original, 'Tools, Removing Fouling, Mk1' for use with all .303" Bren Machine Guns. These w..