These oil bottles were produced in at least 9 different versions, all under the same name and apparently the same part number, for issue primarily with the .303" Bren Light Machine Gun, although they were also standard issue for a number of other weapons including the 2" Mortar, and an alternative issue for Vickers MMGs and other machine guns.

This version is one of the Canadian Pattern bottles. Made in Canada primarily for Canadian Brens, they may also be found on general issue to any of the Commonwealth Forces. These bottles are made from a translucent emerald green plastic (probably celluloid) and many of them still carry a black stamped 'broad arrow in a C' Canadian ownership mark on the side. For reasons best known to the original packers, these bottles were oiled on the outside prior to packing into their stores boxes, in some cases this oil has degenarated the stamps leaving them all but invisible.

Never the most robust version of these oil bottles, these are often found to be cracked or distorted. These ones however are in excellent condition. 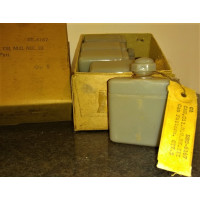