The tools, made for us, are faithful copies of the original, now hard to find, Armourers issued tools. The tools are used to fit and remove extractors from the bolt heads of the Rifles listed above. Unlike the No4 Series Rifles where the extractor spring was a machine made leaf spring made from strip spring steel, the springs used in these rifles extractors were virtually hand forged, folded leaf springs. These are strong within limits, however they will snap surprisingly easily when compressed beyond limits or in the wrong way. These tools were designed specifically to do this job with minimum stress on the springs.

Please note that our latest batch of these tools has been oil blacked to improve corrosion resistance. I have written a detailed and illustrated article on removing and replacing SMLE extractors and the use of this tool which can be found here; Removing and Fitting an SMLE Extractor 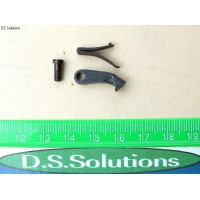 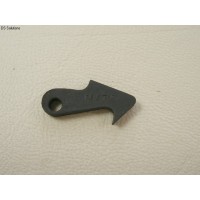 These are original Extractor Claws for the .22" SMLE Training Rifle, Rifle No2 MkIV.These extractor ..