These are original 'Plates, Cut-Off, Magazine', and axis screws for the Lee Enfield SMLE, Rifle No1 MkIII.

Magazine cut-off plates were fitted to all of the Lee Metford and Lee Enfield series of .303" rifles up until the SMLE MkIII. The idea was that to stop troops 'wasting' ammunition the magazines were to be kept fully charged on the rifles with the magazine cut-off plate closed over the top of them and the rifles single loaded for each shot until such time as rapid fire was strictly necessary, or the soldiers ran out of other ammunition, at which point the plate would be swung out to the right side of the rifle allowing rounds to be fed from the reserve in the magazine. When it became obvious during the First World War that production of the rifles needed to be simplified and speeded up, the magazine cut-off was dropped from the design of the SMLE MkIII* with other non-essential items such as windage adjustment on the rear sights and the provision of volley sights. It is interesting to note that in the later designs of the SMLE which were mass trialled in the 1920's and early 1930's that the magazine cut-off was reinstated, although by that time it must have been apparent that single loading rounds of ammunition was a tactical 'blind alley' and sheer folly in a world where the machine gun reigned supreme.

These cut-off plates are specific to the SMLE MkIII rifle, and will not fit or function correctly in other marks or patterns of Lee Metford or Lee Enfield rifles.

These have all been recovered from service rifles and as such all exhibit various amounts of wear to the finish. Most are in remarkable condition having been cleaned, although a few have suffered minor corrosion in storage and have some pitting to the surface, but all are serviceable and useable. The plates are machined from spring steel and the spring in the plate retains the plate either open or shut position. Closing the plate requires firm force with the side of the hand, opening the plate requires the knurled projection on the outside of the plate to be pushed down whilst pulling it outwards. 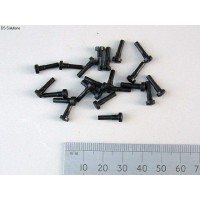 These are original Axis Screws for the magazine cut-off plate, as fitted to .303" SMLE, Rifle No1..